During a recent game of “Where do you want to eat?”…..”I don’t know, where do you want to eat?” we found ourselves at Jaxon Social. Having driven past the building on Beach Blvd about one million times, from when it was Giovanni’s, to KC Crave, to now Jaxon Social, I’m surprised this was actually our first visit. From the outside Jaxon Social looks nice enough. It never appears to be busy due to the parking being around the side and the back. But there was a steady stream of customers and a bar full of people on the Saturday evening we dined there. The interior is crisp and clean. The design and decor were nicer and more modern than expected. The black and mahogany hard surfaces contrasted brilliantly with the white leather booths and old black and white photographs of Jax beach from the days of the boardwalk. It’s definitely a nice space to spend time dining in. It’s the sort of place where you feel a wonderful sense of energy that makes you feel alive. At the same time it avoids the noise level that normally causes a place like that to quickly exhaust you.
Jaxon Social has a fun menu small plates and cocktails menu. Their signature drink seems to be the Slap-n-Tickle. I had a very pleasant white sangria, but their cocktails were creative and interesting. 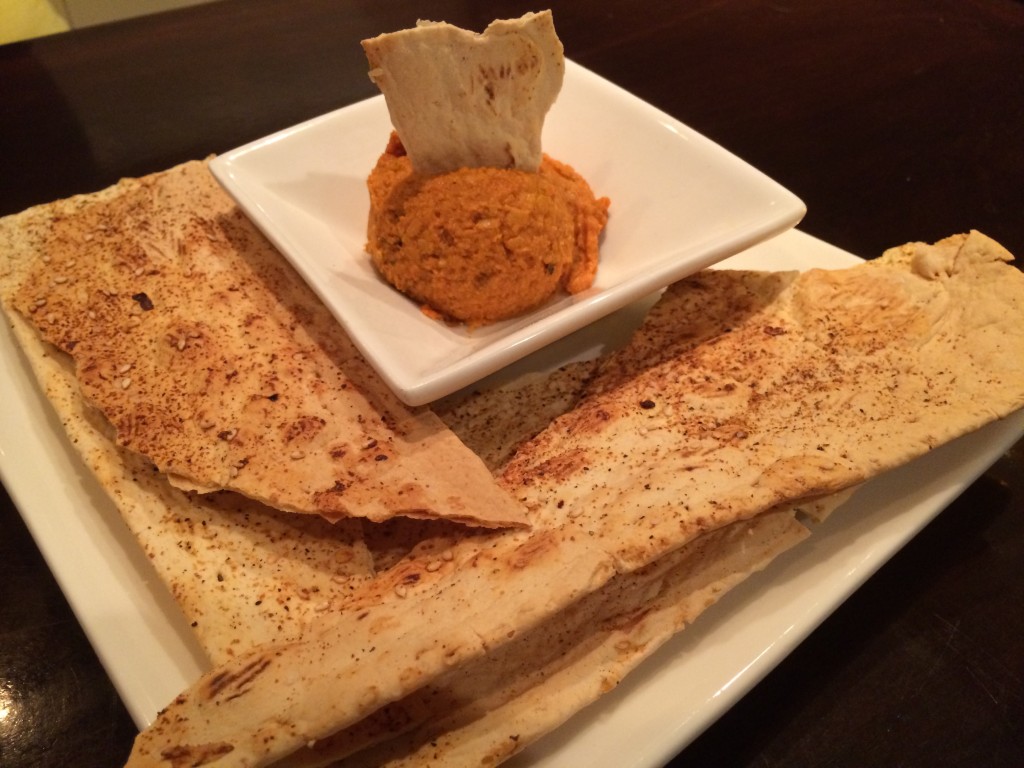 Looking over the menu, The dinner for 2 for $40 (available 4-6pm, Wednesday-Saturday) seems interesting. We asked our waitress about it and she explained it included one street fare item, two entrees (excluding market price entrees), and a slice of their housemade I-Scream Cake. Looking over the menu, most of the entrees were priced $14-$18, with a few around $20. So the dinner for two for $40 could be more or less of a deal depending on your preference. As we explored the menu we realized all the things we wanted to try were not entrees, they were appetizers, street fare, sides, soups, and salads. So we nixed the deal. (For shame. I know. Don’t tell my late grandfather.) 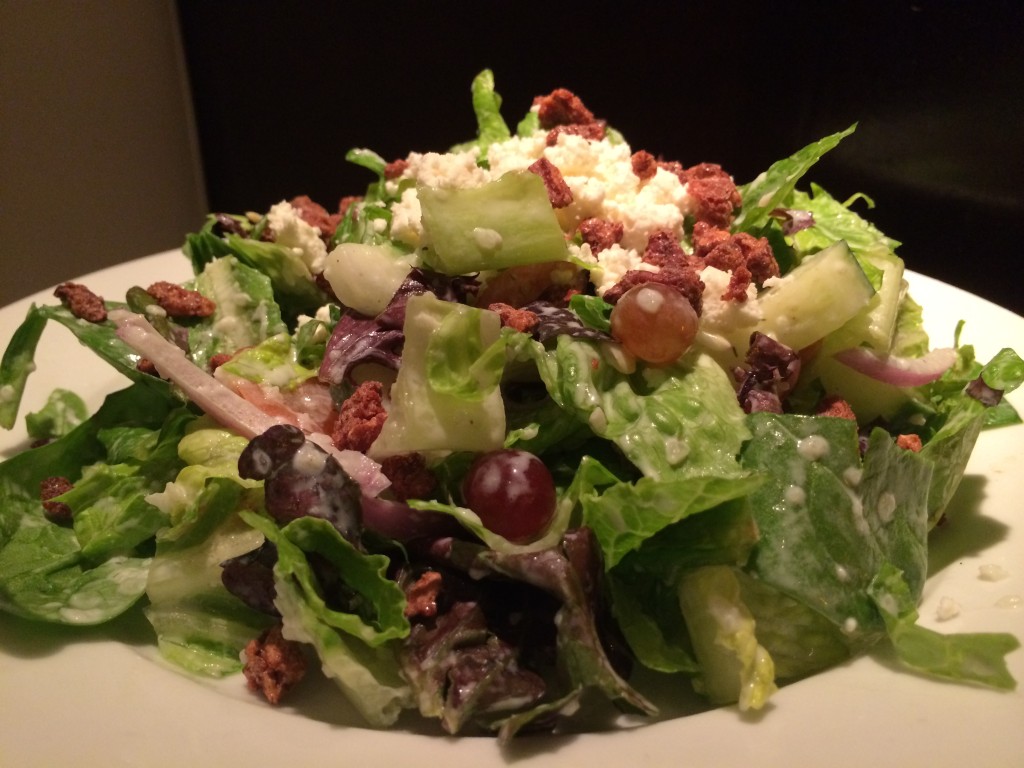 We started with complimentary flatbread and roasted red pepper hummus. It had great flavor, but the hummus was very thick, to the point that our flatbreads were breaking in the hummus. If I had made the hummus at home I would have been super impressed with myself, but I expect restaurants to have everything sorted out, including the consistency of the hummus. 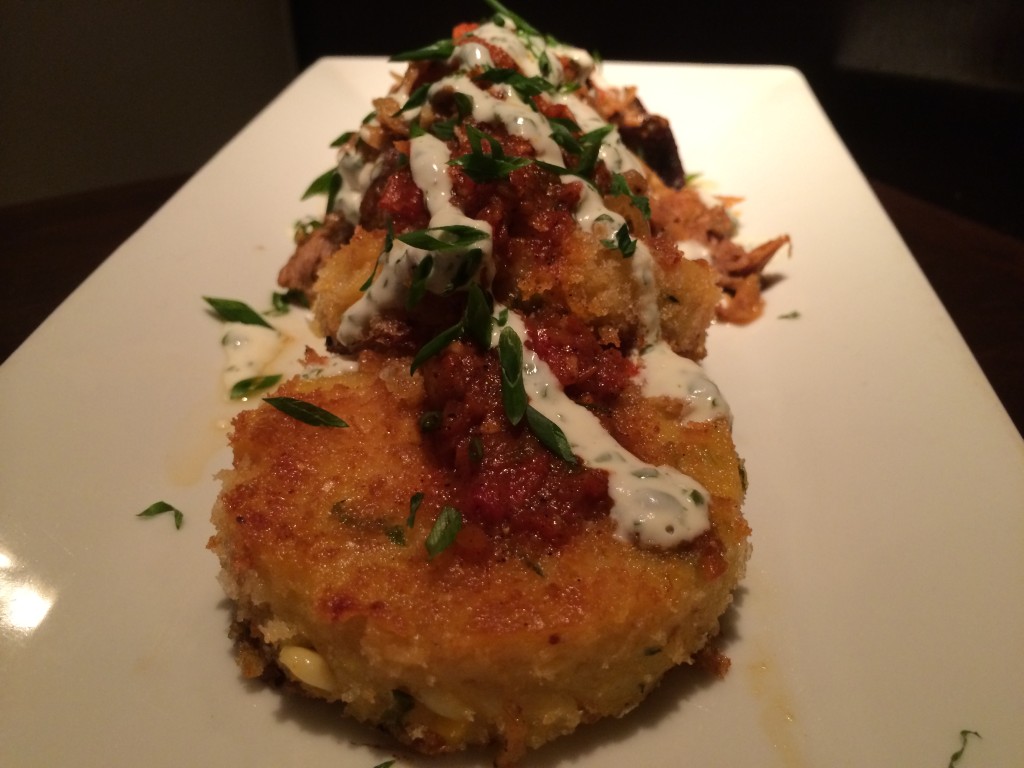 We tried two specials, buffalo cauliflower and flounder napoleon. The buffalo cauliflower was fried cauliflower florets covered in a spicy buffalo sauce, served with yogurt ranch dipping sauce. This was a pretty straightforward dish. Cauliflower battered, fried then tossed in buffalo sauce. The flounder napoleon absolutely stole the show. Large medallions of flounder were fried and layered with fried green tomatoes, some sort of cheese spread similar to pimento, topped with a corn relish, with a balsamic reduction. The cheese sounds crazy, right? Cheese and fish are usually not a palate-pleasing combination. But this was awesome. So flavorful, so fresh. If you go to Jaxon Social make sure to have the flounder napoleon if it’s a special. They really should just add it to the menu. 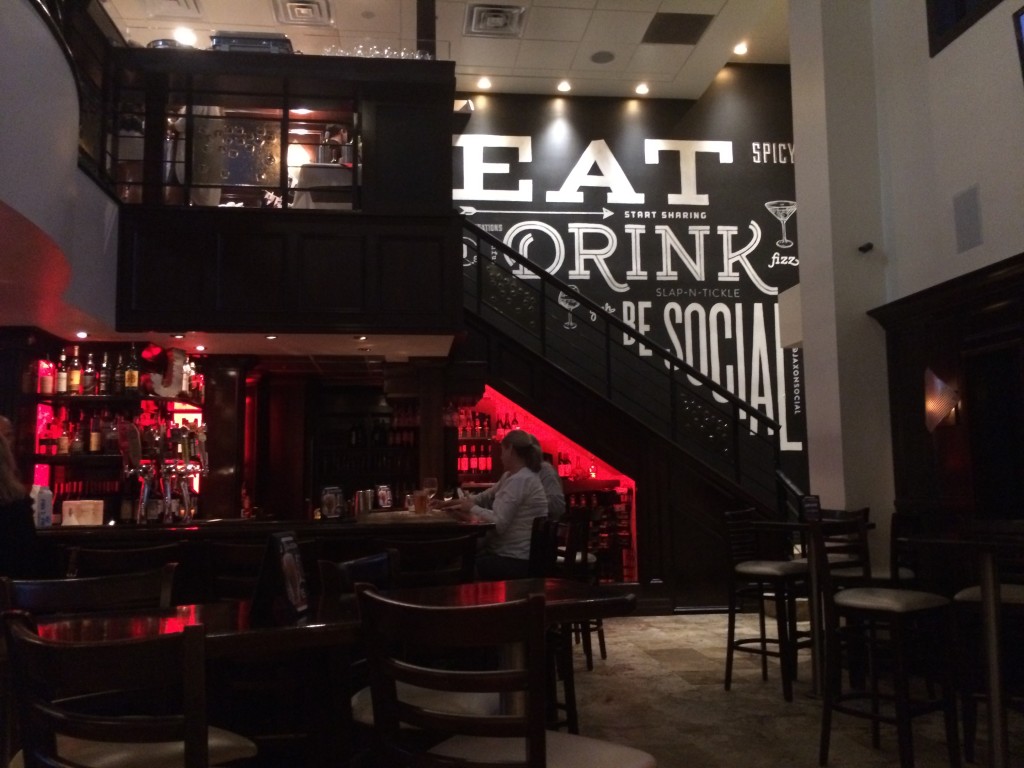 Our next choices were the crab bisque and greens gone wild salad. I was excited about lump crabmeat in the bisque, because a good crab bisque is harder to find than it should be. The bisque came and it was gorgeous to look at with plenty of lump crabmeat on top. And then I took a bite. It was incredibly salty. I guarantee whoever made the soup did not taste it. We tried taking a few bites, trying to get past the salt, but we couldn’t. It was a shame too, because besides the crazy salt content, it had great flavor.
The greens gone wild salad was pretty much as expected. The lettuce was extremely fresh, as were all of the fruits and vegetables in the salad. The salad had the same yogurt ranch dressing that we had with the buffalo cauliflower. It was a nice, light, yummy salad. 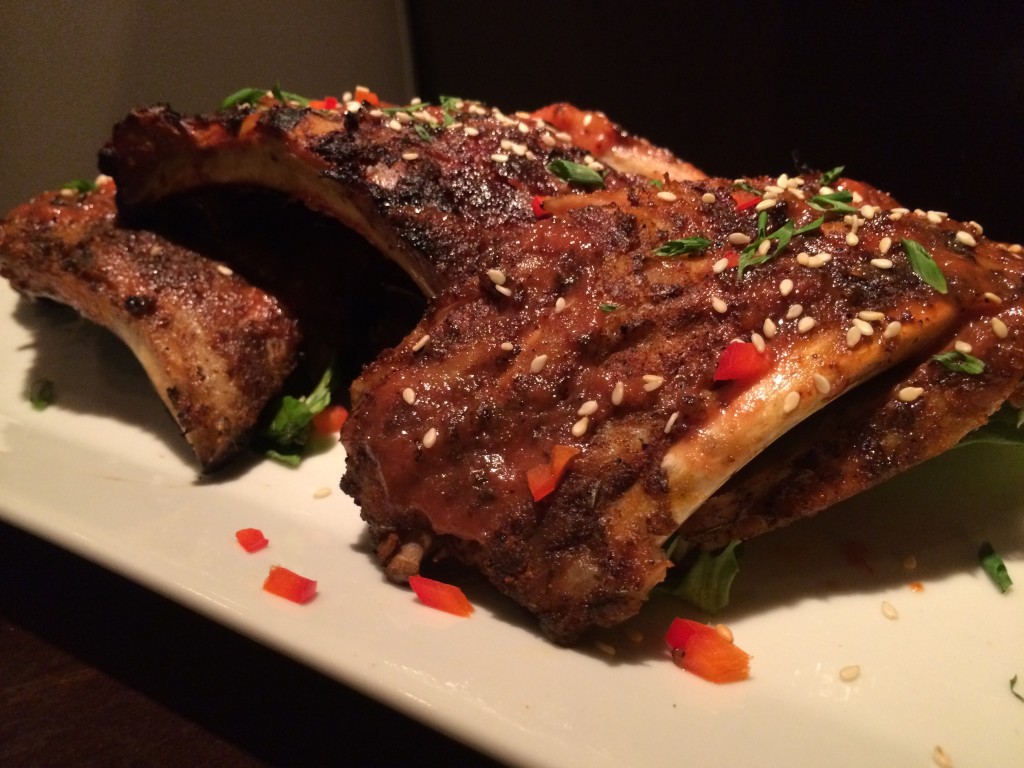 In lieu of entrees we opted to share an appetizer, street fare, and one entree. We chose guava ribs, elote, and roasted pork corn cakes. The guava ribs were tender, slightly sweet, and a little nutty from the sesame seeds on top. You could taste the guava, but it was nicely balanced with the bar-be-que sauce. They were excellent, and a generous portion. The elote came out in a fabulous presentation. The corn had been sliced into disks and grilled, with the husk braided. It was good, but we would have preferred the creamy sauce and powdered cheese on top that everyone loves on Mexican street corn. The entree of roasted pork corn cakes was not any bigger than the guava ribs, which was slightly surprising. The corn cakes were a bit rich, but paired perfectly with the roasted, pulled pork. They also had the yogurt sauce drizzled across the top. 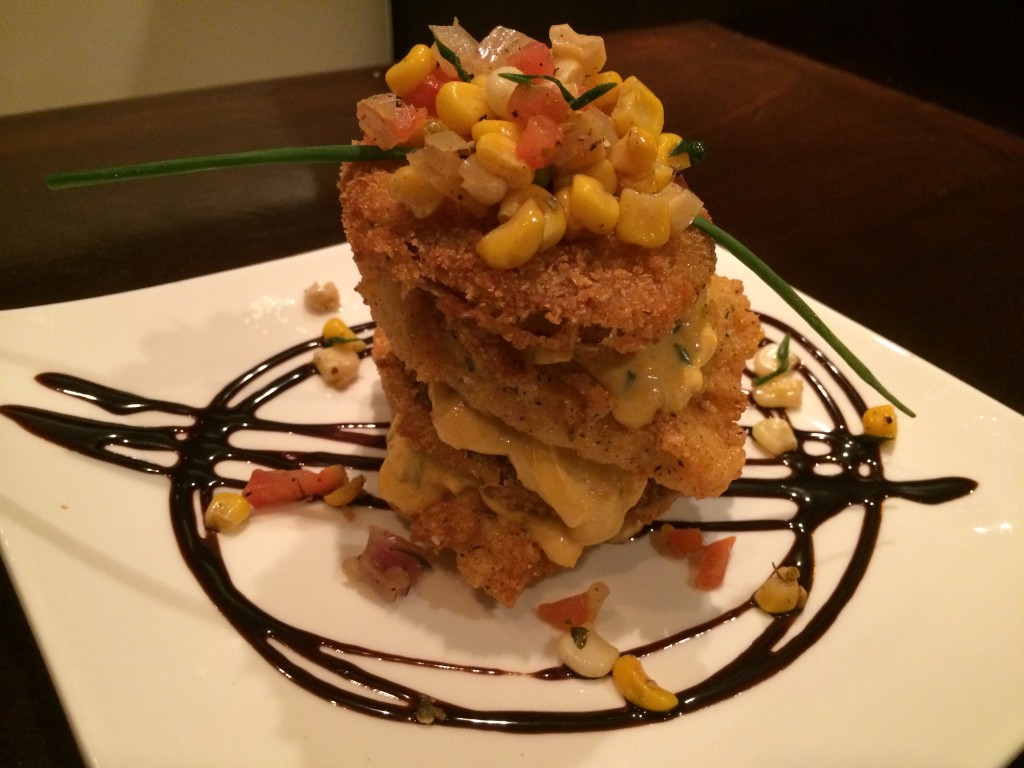 Overall the service was very good. Our waitress was laid back but attentive. Two different managers came over to greet us and check on us during our meal. Toward the end of our meal we had finished eating and were waiting for our waitress so we could get the check. After waiting 15 minutes I spotted our waitress at a table across the (not large) restaurant. She seemed to be answering many questions, which is understandable, but we had been and were still waiting. We grabbed a manager who brought us our check and boxed up our food. Aside from the manager assisting with the end of our meal our service experience would likely have been the best we’ve had at this price point. The staff at Jaxon Social seemed to work well together, which only makes for a smoother experience as a diner.
All in all our dinner was enjoyable. The food was good, the environment was fun and our service was good. 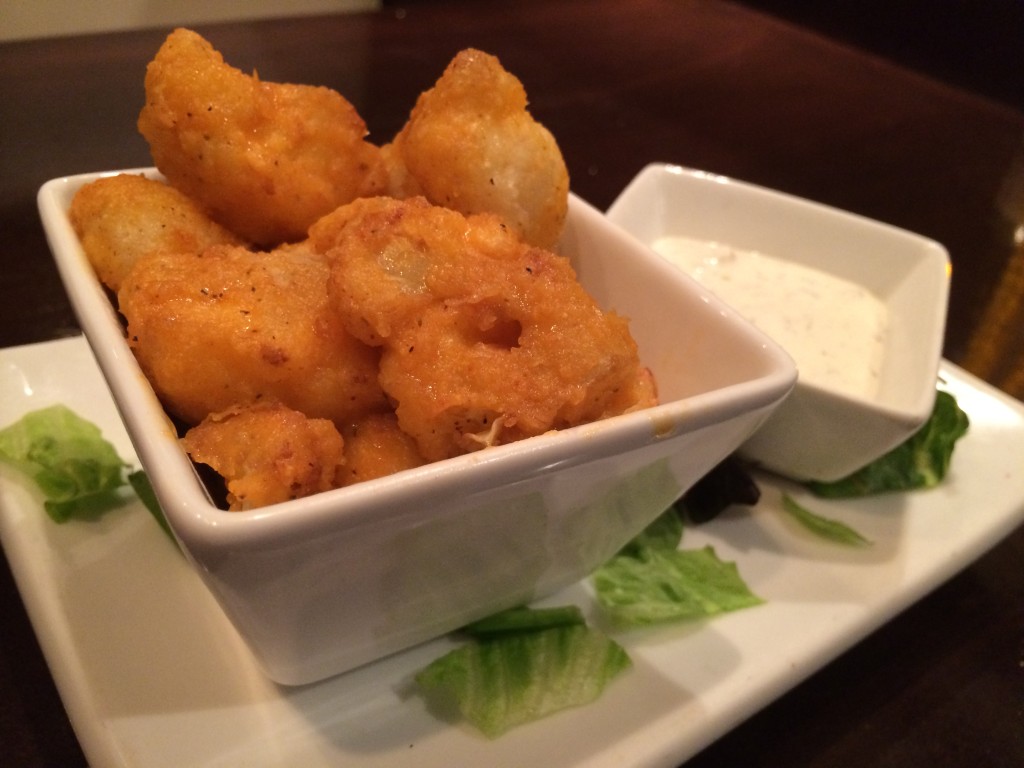 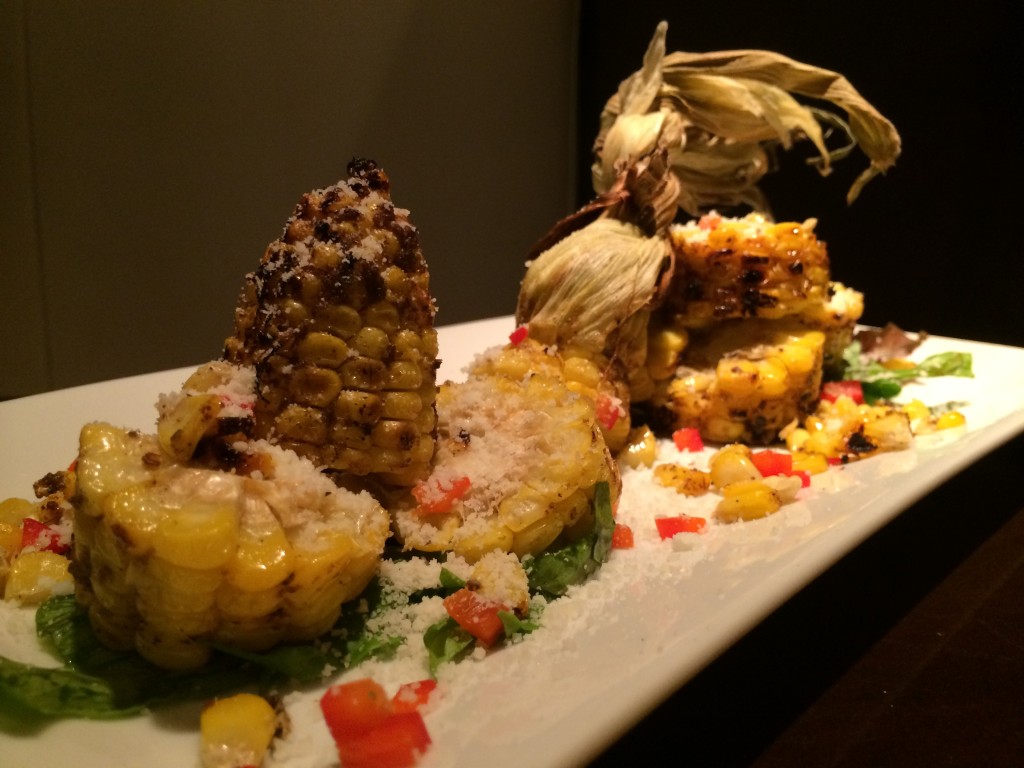 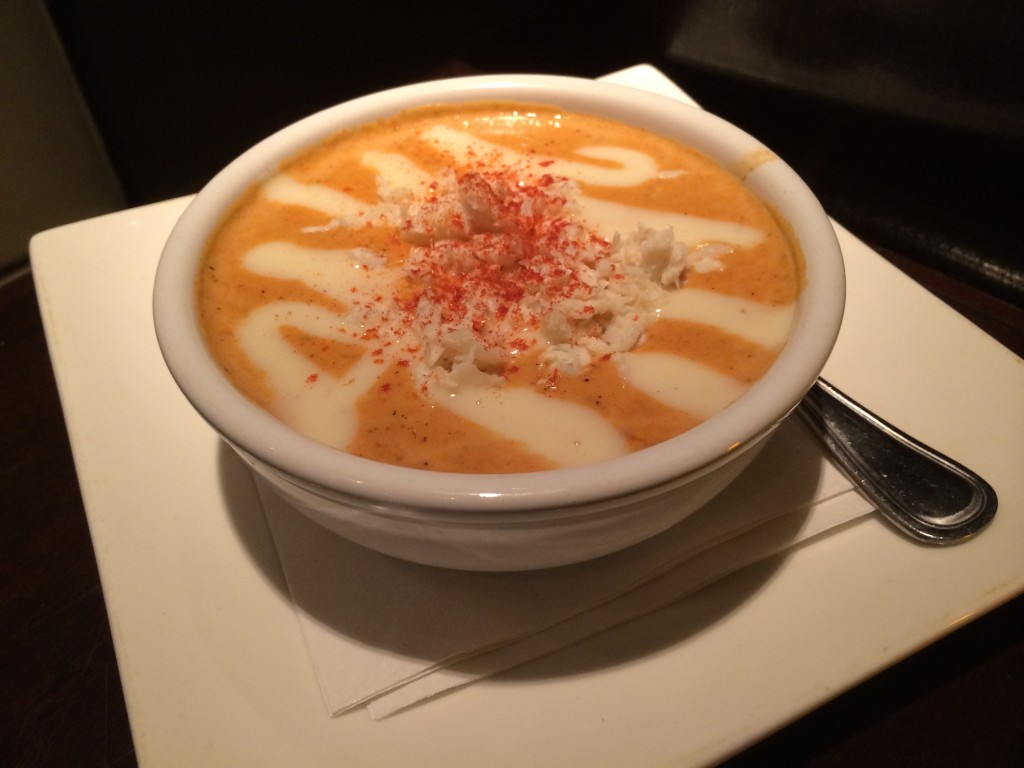