Jacksonville seems to be going through a revival, of sorts, when it comes to BBQ.  New, upscale restaurants such as Gilbert’s Social on Southside and The Bearded Pig on King’s Avenue seem to be thriving, and rightly so, with their fancy rubs, sauces, and beer gardens.

But every so often you want to go OG BBQ from a hole-in-the-wall location, prepared and presented simply in a Styrofoam to-go box with everything served on top of two slices of Wonderbread, drenched in a tasty homemade sauce and a Red Kool-aid to wash it all down.

And no other place fits that OG style better than Mr. Ed’s Heavenly BBQ.  When we were looking for Mr. Ed’s, we probably drove by the place twice before we found it.  It’s in an easy-to-miss spot located on the corner of Blanding Boulevard and 103rd in a tiny red shack on wheels that shares a parking lot with a questionable looking check cashing place.  If you make it to the corner of Blanding and 103rd and can’t find it, simply park somewhere between Krystal’s and the questionable check cashing place, and follow your nose.  It’ll lead you straight to the wonderful smells Mr. Ed’s is cranking out of his little red shack and the smoker behind it.  He’s been putting out great, unpretentious BBQ for a little over two years. 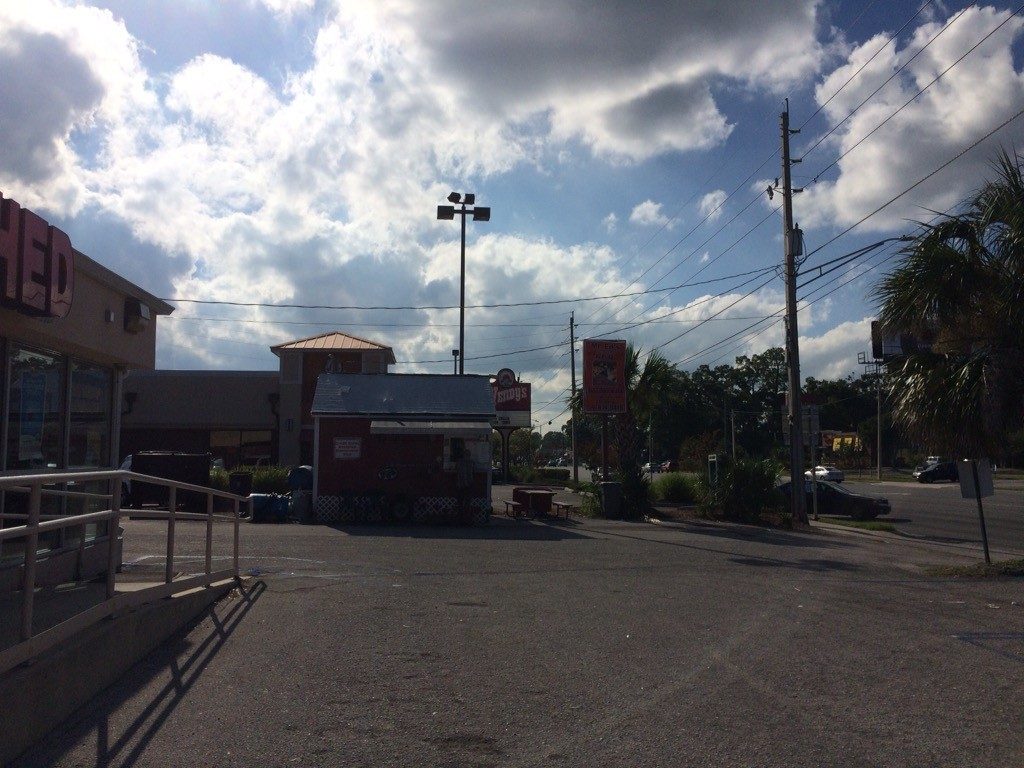 After perusing the menu at the take-out window, we decided to order all three meats available – pulled pork, a chicken leg quarter, and a couple of ribs.  It came with a choice of two sides, so we decided on mac & cheese, and baked beans.  And of course, it was all served on a Styrofoam to-go box, slathered in Mr. Ed’s house-made sauce on two pieces of Wonderbread.  And a Red Kool-aid to wash it down with.  Like I said, OG BBQ.

Let’s start with the reason BBQ exists: the meat.  All of the meats were slathered in Mr. Ed’s homemade BBQ sauce.  It was tangy, a little vinegary, and did a great job of enhancing the fantastic smoky taste of all three meats.  It didn’t overpower or take over.  The sauce did its job as a supporting actor and made the meats better. 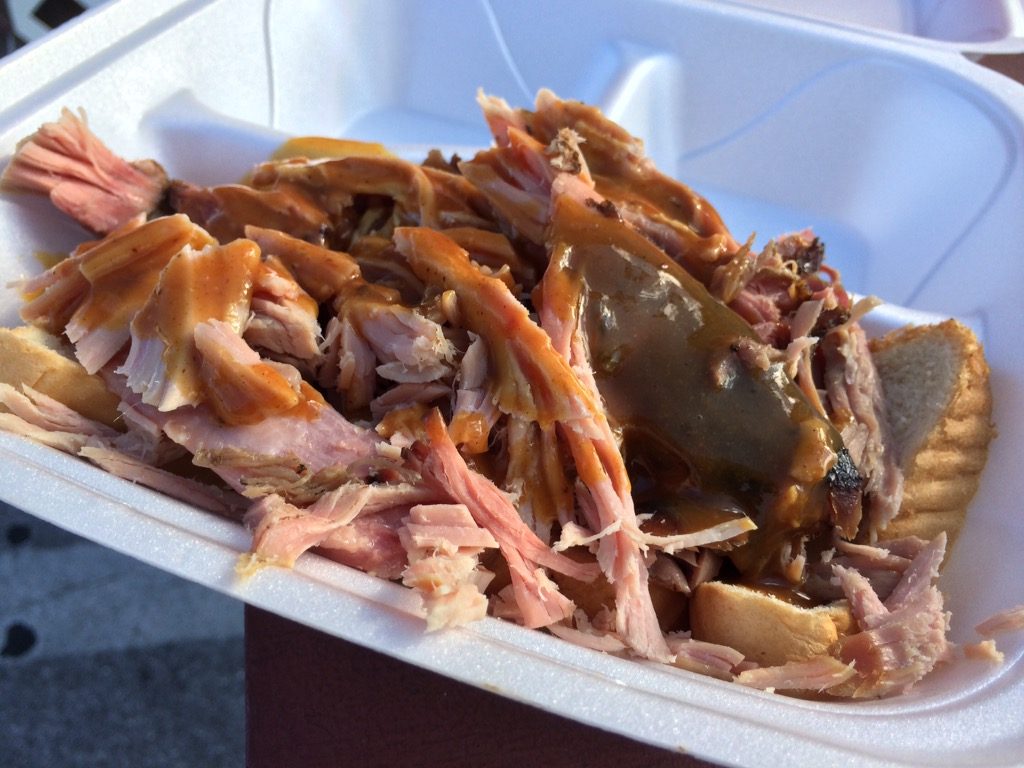 The pulled pork was delicious.  It was tender and juicy, but not fatty.  It pulled apart gently and easily when you put it between the two pieces of Wonderbread and took a bite.  Never once did I bite down, pull away and had a dry, unpulled piece of pork come flying at my shirt like it was a stain magnet.  Next up were the ribs.  They had a nice bark on them and superb pink smoke ring throughout the outer layer of the rib.  They were so tender; they fell apart from the mere force of gravity pulling down as I picked them up to eat.  As I put the ribs to my mouth to take a bite, it was if the bone leapt from the meat.  Finally, the chicken leg quarter…oh the chicken.  Doubtless the best meat offering on the plate.  It was succulent, tender, and full of smoky BBQ flavor.  I love chicken.  It’s basically a blank slate for whatever flavors you want to throw at it.  Mr. Ed’s BBQ chicken is probably some of the best I’ve had so far in Jax.  It’s appropriate that Mr. Ed calls it “heavenly BBQ,” because I dug in to that chicken leg quarter like I was searching for God and the meaning of life and existence.  I ate it quickly before my stomach told my brain I was full and forced me to stop eating.  It was truly out of this world. 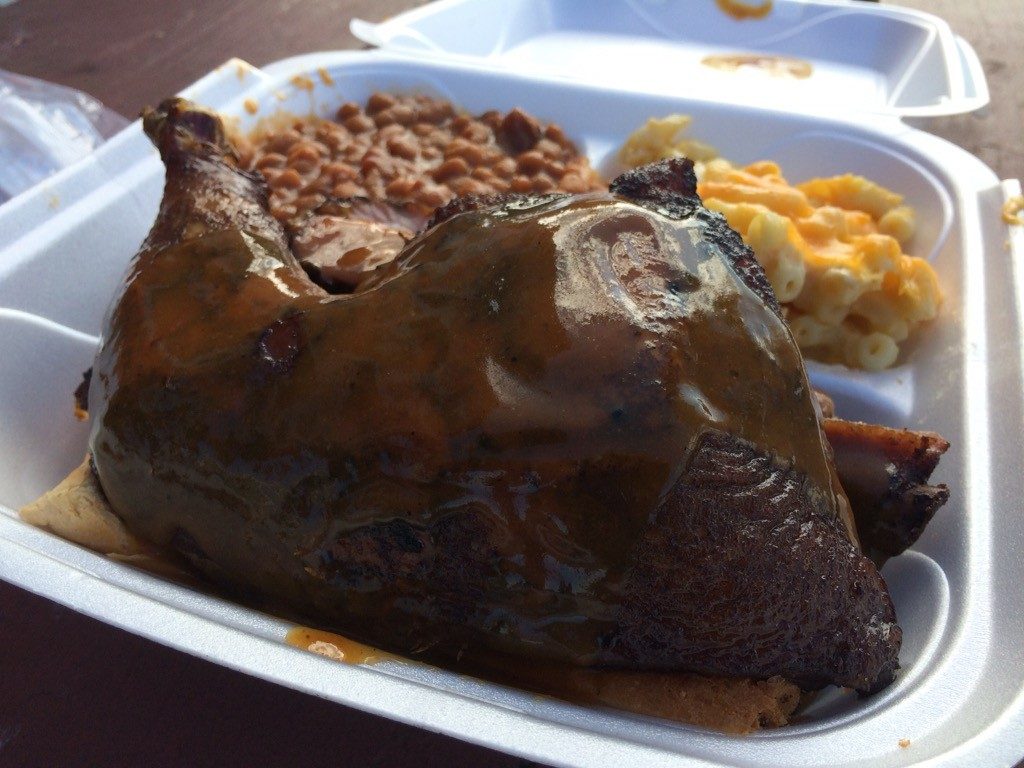 The mac and cheese tasted homemade and cheesy.  It was a little drier than I would’ve liked, but it offered a nice diversion from all the meat I was devouring.  The baked beans didn’t quite carry over the smoky BBQ-ness of the meat to the beans, like some baked beans do.  The sides were serviceable, which is fine, because I wasn’t there for the sides.  The only other nitpick is everything was so rich and heavy, I was dying for a pickle spear or a side of pickle slices for some acidity and give my palate a break from time to time. 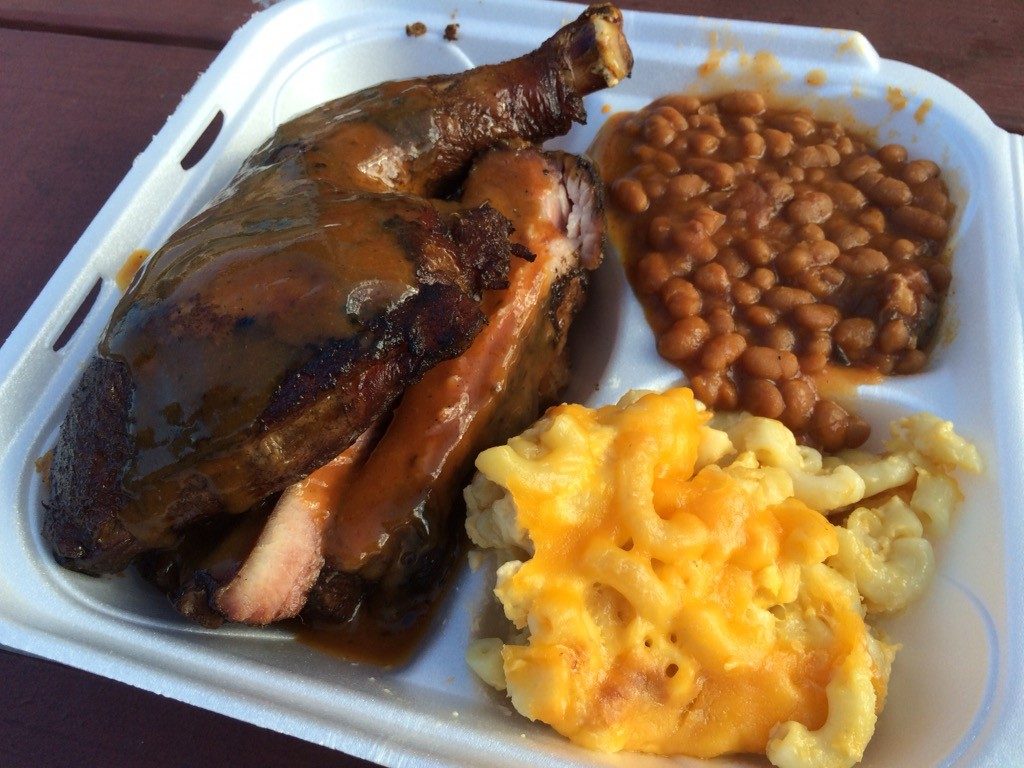 Overall, the food was flavorful and plentiful.  If you’re looking for a good, old-fashioned BBQ joint, serving amazing BBQ at equally amazing prices, owned of the nicest guys you’ll ever meet, then head straight for the corner of Blanding and 103rd to the church of OG BBQ and the archbishop of smoked chicken, perfectly pulled pork, and righteous ribs, Mr. Ed’s Heavenly BBQ.