To say I have a sweet tooth would be a massive understatement.  It’s more like I have a mouth full of sweet teeth.  When I crave something sweet, I don’t reach for candy.  I usually go for some sort of baked good – a donut, cupcake, muffins, Ho-ho’s, Ding-dongs, Honeybuns, Twinkies, Swiss Rolls, Little Debbie Oatmeal Cream Pies, you get the picture.  Pretty much any type of cake-like quality with some kind of frosting/cream in or on it, and I’m good.  I’ll even go with a Tastykake, if I’m desperate enough.

Like some sort of morbidly obese Spidey-sense tingling, my sweet teeth led me to The Pecan Roll Bakery while driving through Fernandina Beach.  And I say it led me because if you blink, you’ll miss this little gem.  It’s a very small building.  There is a small eat-in area inside to the left, but it’s only two 2-tops and very tiny.  I was passing through Fernandina Beach and I was getting my order to go anyway, so I wasn’t concerned with the size of the café area.  When I turned to the right of the door, the warm glow of the bakery cases lit up my eyes like the Aurora Borealis. 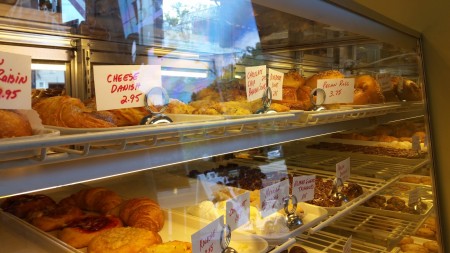 The Pecan Roll Bakery’s menu is expansive.  They offer the traditional things you’d expect from a bakery – cakes, bagels, muffins, scones, sweet rolls, every type of cookie you can imagine, and various breads.  What I didn’t expect was the amount of savory baked items available.  The Pecan Roll Bakery offers various empanadas, pierogi’s, spanakopita, cheese straws, and quiches.  They also offer specialty items like focaccia, New York Rye bread, Rosemary Durham bread, babkas, flans, and cronuts (only sold on Thursdays).  Everything is made from scratch every morning with no preservatives, artificial sweeteners, or chemicals.  They make only a limited number of items for the day, so once an item is sold out, it’s gone until the next day.  They also rotate their items based on season, introducing specialty items sold only during that time period, like pumpkin spice flan during the fall.  They do take special orders, but they do need a day or so advance notice.

When it was time to order, it was like an out of body experience as my sweet tooth decided to jump out of my mouth and order for me.  It ordered two Cinnamon rolls, a pecan roll, and a wedge of hummingbird cake. When I finally came to and realized what I had, I figured I should balance things out and ordered a veggie empanada.  You know, it’s like ordering a Diet Coke with the Big Mac value meal.  It evens things out and cancels out calories. That’s how it works, right?  I got my items to go and headed for the house.  It was a long drive as the smell of freshly baked items wafted through the car.  Since it was around lunchtime, I decided to do what my mama taught me and eat the Veggie Empanada first. 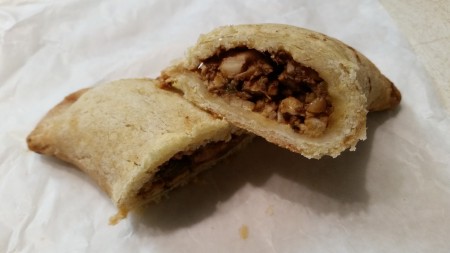 The Veggie Empanada was delicious.  It had a tender, flaky crust, very much like a piecrust.  The veggie filling consisted of mushrooms, black beans, green chilies, lentils, and other vegetables.  There was a very distinct taste of cinnamon in the seasoning mix.  The surprise ingredient was the addition of golden raisins.  It added an unexpected sweetness to the empanada.  The lentils, mushrooms, and black beans gave it a very meaty texture and flavor.  As a card-carrying carnivore, I approved.

Before I dove in to the main course of the sweet, sweet rolls and cakes, I tried out the samples of blueberry scones.  Normally, I’m not a fan of scones.  I find them dry and crumbly, which they should be because they normally accompany a nice cup of coffee to dip the scone.  I don’t drink coffee, so I tend not to eat scones. But these were free, and I’m never one to turn down free samples.  The blueberry scones were dry and crumbly as expected, but with fresh blueberries baked right in the scone, it was somewhat moist when you got to the parts with the blueberry in it.  It was a nice surprise as I bit into the scone and a burst of blueberry goodness met my palate.  I’m still not a fan of scones in general, but The Pecan Roll Bakery’s scone almost made me a convert. 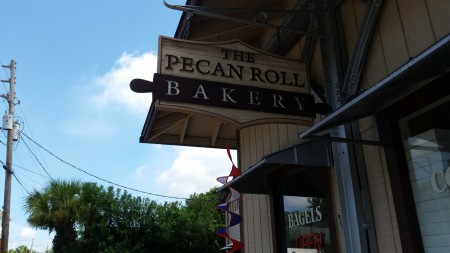 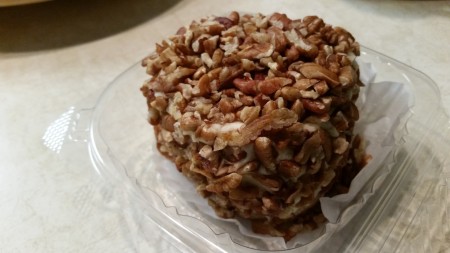 The Pecan Roll Bakery’s version is covered from top to bottom in what looks like an entire crop of pecans.  The cake itself is very soft and moist and the outmost layer of pecans provided texture and crunch.  My fork cut smoothly into the two layers.  I lifted the fork and I immediately got the fresh tropical smell of the pineapple.  As I began to eat the cake the taste of banana and pineapple really came through.  The cream cheese frosting was light and creamy with just a hint of added banana.  The traditional Hummingbird Cake recipe calls for the use of canned, crushed pineapple.  This is used to add moisture to the cake.  I’m not for sure if The Pecan Roll Bakery followed suit, but their cake was incredibly moist, flavorful, and fruity.  You’ll love this cake!

At this point, a mortal man would’ve stopped at the Hummingbird Cake.  But my sweet tooth is pure of heart and has the strength of ten men’s sweet teeth, so I pushed on.  Up next was the Cinnamon Roll.  The Cinnamon Roll is a best seller and tends to sell out quickly.  They only had two left for the day, so naturally I ordered them both.  They were fantastic.  The outside edge was a perfect touch of crispy.  The icing was gooey and delicious.  I began to work my way towards the middle of the roll, which I think we all can agree is the best part of any cinnamon roll.  It had the exact amount of doughiness that gave the cinnamon roll the right amount of chew without feeling undercooked.  It’s not nearly as sweet as a Cinnabon, a level of sugar so high; I call my dentist to apologize.  Rich, but not cloyingly sweet.  Dense, but not heavy.  The Pecan Roll Bakery’s cinnamon roll is an impeccable cinnamon roll. 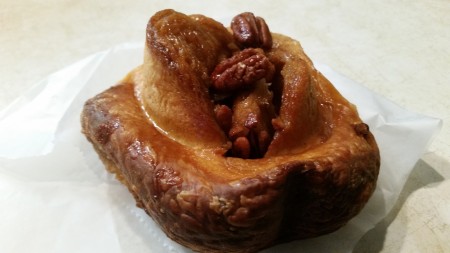 The final stop on my Tour de Cavities is The Pecan Roll Bakery’s signature item; The Pecan Roll.  If you’re going to name your bakery after one of the things you sell, that thing better be the best thing on the menu.  This one certainly did not disappoint.  No icing, not a lot of ingredients.  It’s a simple pecan roll done well.  The dough had kind of a sourdough type flavor to it that kept me coming back for more bites despite everything I ate before it.  It was sweet with a little tartness.  The glaze on the top of the pecan roll gave it a nice shine and little stickiness.  The pecans were baked right in and topped the roll.

Overall, this is a great little stop in historic Fernandina Beach.  If you’re looking for a great sweet roll and a cup of coffee, you can’t go wrong with The Pecan Roll Bakery.  Now, if anyone needs me, I’ll be curled up on the floor in a diabetic coma.