Anyone who knows us knows we love sweets.  We dream about desserts.  We regularly talk about how much sweet treats play an active role in our lives.  So when we found out about a new dessert option in Jacksonville called Mocha Misk’i, we were committed to finding out the full story.  Mocha Misk’i opened in downtown Jacksonville next to Chamblin Books on Laura Street just about a month ago, and there is already a tremendous buzz surrounding their business.  Mocha Misk’i is strictly a brownie shop, but not your normal run of the mill brownies.  They are creating unique gourmet flavors, gluten free options, and vegan options.  Prior to trying some of their creations, we sat down with the owners Helga and Pilar to learn about how Mocha Misk’i came to be. 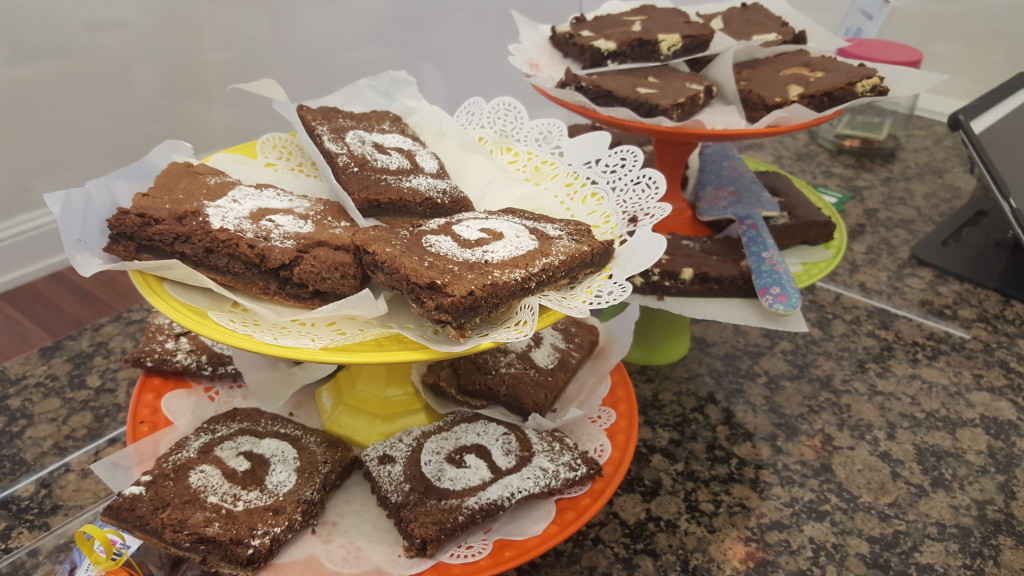 Sisters Helga and Pilar are originally from Colombia.  They grew up in a large family of girls and their mother was adamant on keeping them busy at all times.  Between their mother and father, they were instilled with entrepreneurial skills from an early age.  They both were living in California when Helga was transferred to Jacksonville for work.  Pilar’s husband was also searching for a new job so Pilar and her husband also moved to Jacksonville 14 years ago.  Pilar was a nutritionist and has a long background in health and wellness.  This motivated her to be able to create the gluten free and vegan options now available, with sugar free being the next goal for her brownies.  Pilar began with a home bakery and has been successfully creating beautiful, custom ordered cakes for the past 6 years, and now runs Pilar Cakes through Mocha Misk’i.  Helga works in exports and has owned her own business since she moved to Jacksonville as well.  The two of them dreamed of working together to unite Pilar’s baking skills with Helga’s business skills, and that is how the idea for Mocha Misk’i was born.  They incorporated Mocha Misk’i in June and began the process of designing their business and searching for the perfect space.  They began looking at locations in Mandarin originally, then Pilar suggested that downtown may be the perfect fit for them.  Helga’s daughter had recently started attending La Villa and the more they analyzed the area the more they thought that it could be home for Mocha Misk’i.  When they found the location on Laura Street, it had no water and had no semblance of a functional buildout for a bakery.  This resulted in a six month buildout to renovate the space, which is now perfectly suited to their retail and baking needs. 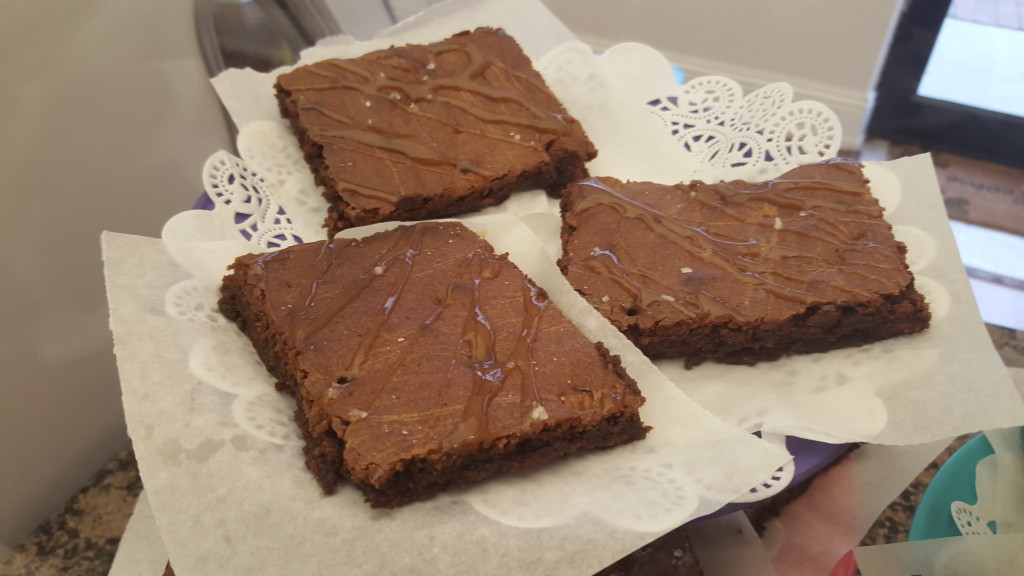 The name Mocha Misk’i is a tribute to Helga and Pilar’s Colombian heritage.  Mocha means coffee and misk’i means sweet.  Pilar and Helga explained, “We wanted a name that would be catchy and cause people to come in to see what we were.”  To sum up Mocha Misk’i, Helga told us, “Basically we are a brownie store with specialty brownies.  We also have messages that we make with brownies, as well as our Misk’i Roll (brownie sushi!) you can eat with chopsticks.  That comes with chocolate and caramel for you to dip it in.  When we started the business the customer ordered messages online, but when we got this place on Laura Street we decided to make it into a retail store for people who want lunch sweet treats or afternoon sweet treats and not just custom orders.”

Upon walking in to Mocha Misk’i the various order options are right in sight line with a counter full of platters of several of the brownie types and a display case with even more options.  Hanging from the wall are examples of their brownie messages and their Misk’i sushi rolls.  Brownie messages run from $30-$55 and can be customized for any occasion. Helga told us that they’ve already received orders for baby announcements, I love you’s, thank you’s, prom invitations, and even break up messages such as “Over him.”  The brownie messages are individual brownies shaped into letters and covered with a colorful pattern to distinguish each letter.  These are also excellent for corporate orders as Mocha Misk’i has already added the ability to print corporate logos onto the brownies.  The Misk’i sushi roll comes in five flavors and run $20 per roll, which includes their signature reuseable chopsticks in bright cheerful colors.  For smaller orders, individual brownies can be purchased for $4 for brownie and are currently available in twelve flavors. 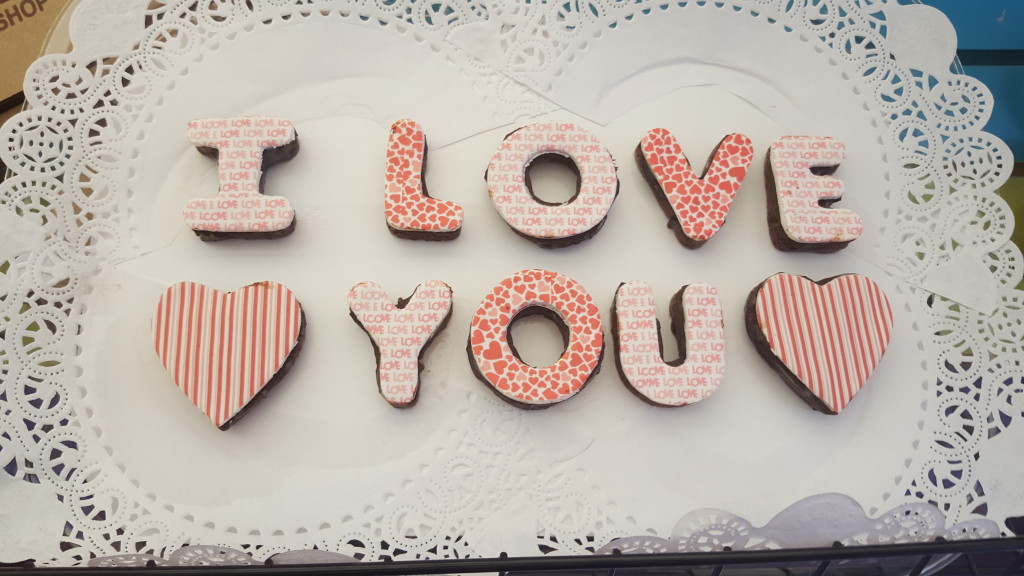 Mocha Misk’i – I Love You Too, Brownies

Helga and Pilar brought us two platters of brownies to try on our visit.  We began with the individual $4 brownies that are available daily for retail purchase.  First up was the Original brownie, which is a denser more cake textured brownie with a light dusting of powdered sugar on top.  For those who prefer a heavier brownie this is a good starter option.  Next up was the sea salt caramel which is more of a traditional brownie texture and is covered in large grain sea salt.  The caramel is such a pure flavor in this brownie and the sea salt perfectly balances all the sweeter flavors.  The S’mores brownie, which will be the next vegan option as well, is a rich treat stuffed with marshmallows and nuts.  We wished the marshmallows were a little more toasted on our brownie so that we could have had the full “camp fire” experience.  I don’t think it would hurt to have a little graham cracker dusting either.  The Peanut Butter Swirl stole the show of the individual flavors.  Heavy spoonfuls of peanut butter are put into the brownie batter and it melts throughout each bite of the brownie.  The creamy peanut butter inside, paired with the crispy brownie edges and crunchy slices of peanuts makes for one incredible brownie.  We couldn’t get enough of this one.  Our final tasting of the individual brownies was the vegan brownie.  The vegan brownie is made with vegetable oil in substitution for the eggs and I can happily report that the vegan brownie is just as moist as all the other brownies we tried.  There is a slight taste of vegetable oil on the back end of the brownie, but that is a simple trade off for a superb vegan product that isn’t readily available elsewhere.  I have faith that once the S’mores vegan brownie is available the extra marshmallows and nuts will cover up the vegetable oil aftertaste and it will taste exactly like the non-vegan counterpart. 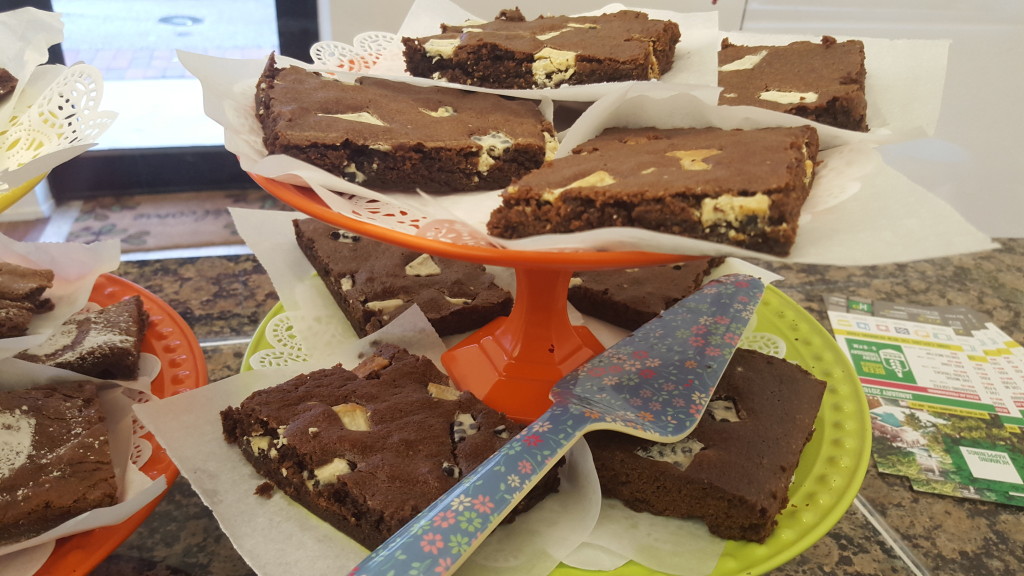 Mocha Misk’i – All The Brownies

We also were able to try three of the Misk’i rolls too.  It is so much fun picking up the brownie sushi with the chopsticks.  I can’t imagine how delighted children will be with it because the two adults involved in this tasting were having a great time.  The sushi slices are a little wide for the chopsticks but I think that this will be easily resolved as they create more of the sushi and get the routine of production.  The signature 1901 brownie was the one I was most excited to try because of the story behind the brownie.  The Great Fire of 1901 in Jacksonville reshaped our city and developed it from a sleepy southern town similar to Savannah into the city we are familiar with now.  Obviously the name of the brownie is indicative of Jacksonville rebuilding itself.  The flavors paint the picture of our city that we love.  Mocha represents the coffee smells wafting through downtown Jacksonville with the wind.  The brownie itself is infused with Florida citrus to represent the whole state, and it is sprinkled with sea salt to bring in the flavors of our ocean.  I got chills as Helga and Pilar explained their development of this beautiful testament to our city, and chills again as I ate the brownie and tasted the love put into the final product.  This brownie is nothing short of incredible and it makes a perfect gift that is truly unique to Jacksonville.  The citrus and the sea salt together truly taste like Florida. 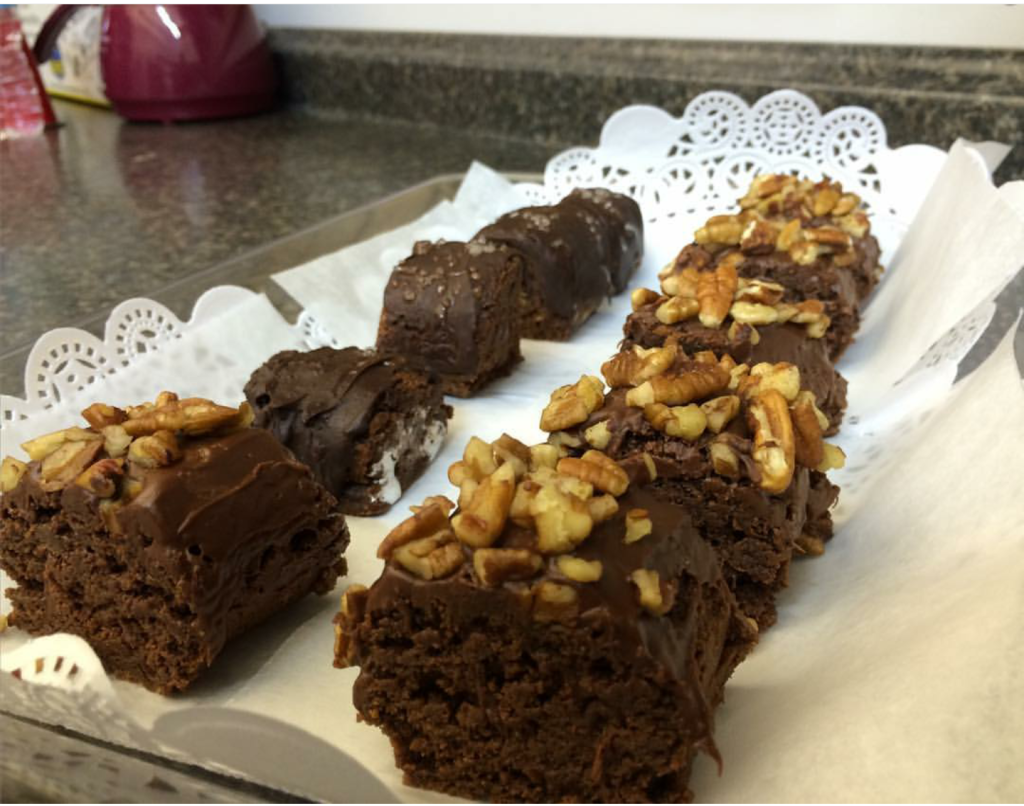 Our next Misk’i roll was equally a stand out in the flavor department.  Passion fruit is blended into the brownie mixture and leaves a simple, lingering taste after each bite.  It’s sprinkled with fresh coconut to add even more tropical flair.  Our final Misk’i roll was the Nutella roll.  For Nutella lovers this is going to be a stand out winner.  Normally Nutella flavored items blend a little of hazelnut flavor into chocolate.  Or they sparingly incorporate a teaspoon of Nutella into the dessert.  Mocha Misk’i gives Nutella the love it deserves.  The brownie is absolutely stuffed with Nutella and I had to take a minute to compose myself after each bite.  Go ahead and buy a whole roll for yourself, you’ll eat it I promise.

Mocha Misk’i is positioned for success in Jacksonville, and especially downtown.  Helga explained, “From the get go, every step of the way, we have thought ‘can we replicate this?’  So our goal is to open more to get the rest of the family our involved.  We designed everything, including the boxes, ourselves.  The boxes are specially measured to accommodate the taller sushi rolls.  The chopsticks match our colors.  Everything was intentionally designed.”  As part of the downtown community, Mocha Misk’i has already received immense support from the Chamber of Commerce as well as from other downtown businesses.  Helga and Pilar immediately felt as if they were a part of a family and said that every single day a business owner has checked on them to make sure they’re doing okay.  They’ve assimilated well into the Jacksonville community already, and we expect that expansion will come faster than they think.  For Helga and Pilar, their goal is simple – they told us, “We just enjoying seeing people happy.  We are focused on being the best brownies in Jacksonville.” 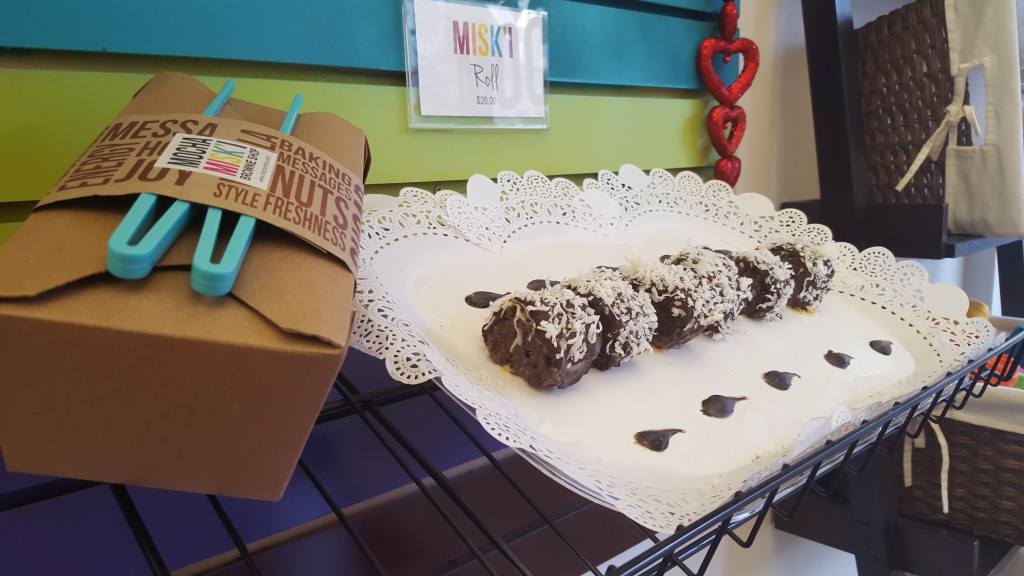