Overview and concept: A true Jacksonville institution, The Donut Shoppe has been serving customers in Arlington since it opened its doors in 1962. They open bright and early every day at 5am and serve delicious donuts made fresh daily.  While Krispy Kreme and Dunkin donuts may be good, The Donut Shoppe takes you back to time where every corner wasn’t some giant chain and every donut didn’t come off an assembly line looking identical.  They take cash only and they close the doors when they sell out. You’ll have to show up early if you want to get some of this sugary goodness! According to a 2010 Times Union poll The Donut Shoppe had the best donut in Jax.  We’re convinced that assertion still holds true today. 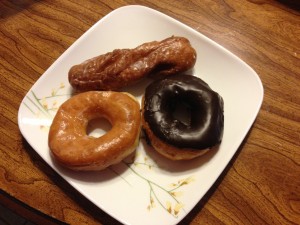 Food: On this visit to the Shoppe we took home a dozen donuts($8.37) plus an “ugly” also known as an apple fritter. We started off trying the standard glazed donut.  It was pretty darn good.  It was slightly more dense and sugary than a Dunkin but not nearly as dense and sugary as a Krispy Kreme. Next we tried the donut twist.  Most places basically twist a glazed donut and serve it up so you’re essentially getting a larger glazed donut.  At the donut shoppe they twist and glaze a cake donut.  It’s beyond amazing.  This is our favorite at the shoppe.  The chocolate cake donut is basically the glazed with chocolate frosting on top.  That’s pretty self-explanatory.  The ugly at The Donut Shoppe is HUGE. Some apple fritters have big chunks of apple in them and the apple flavor becomes a bit overwhelming. This one had a wonderful light apple flavor, a nice crunchy outside and soft inside.  It was a delight to enjoy. 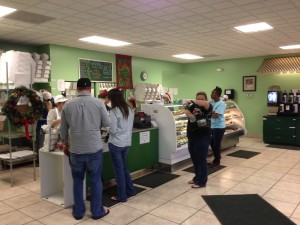 Service: When it’s your turn you walk up to the counter one of the friendly ladies promptly takes your order, fills your box, takes your cash, and you’re out the door.  The ladies move quickly and get you going to work, school, or wherever you’re headed in a jiffy. One of the things I love about the donut shop is that aside from “the ugly” all the other donuts are available for inclusion in your dozen at no additional charge.  A lot of shops charge extra for cinnamon rolls and twists.   These guys charge $8.37 regardless of what you choose.  Compare to Krispy Kreme at $8.79 for a dozen assorted and you’ll see better quality doesn’t always have to come at a higher price. 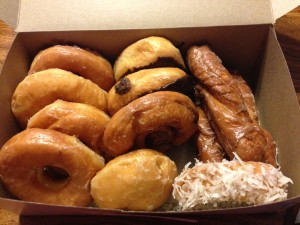 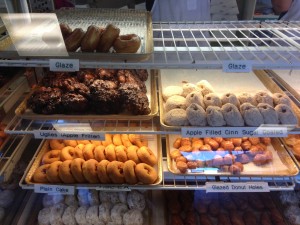 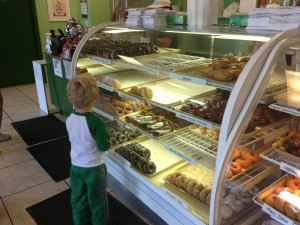 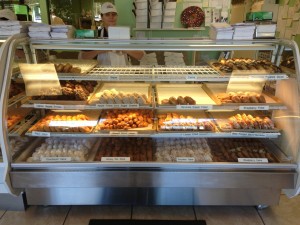